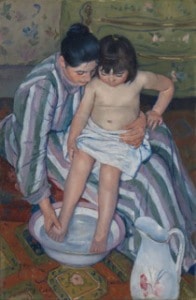 The first night after the conference I had a wonderful time visiting with some old Wheaton College friends. We spoke a lot about the conference. It was such a joy to share the hope that had been given to me. Later, when I put my children, ages 11 and 8, to bed, we had a wonderful time reconnecting and cuddling. We were staying in a hotel room so they were sharing the sleeper sofa and I was lying there between them. My son asked something like, “Tell me words, Mom, like how you love me. Say those words.” So I basically began similar to where the healing of memories prayer begins, “I loved you before I even knew I was going to have you. I was so excited when I found out you were coming. When they put you in my arms after you were born, I was so happy to receive you…” I shared the similar but also different stories of my love for both of them. Amazingly each waited patiently while the other was receiving!

When my son was little and my daughter was a baby, I was in a dark place. I experienced joy but also lots of anger. The work of motherhood and the difficulty of sleep deprivation were the triggers for so much old hurt, rejection, and anger. Every fiber in me was screaming to leave my family. Several years ago, I asked my son for forgiveness for all the times I’d yelled at him when he was little (carefully so as to not rewound him and appropriately for his age at the time). I asked him if I could pray that the Holy Spirit would touch any places in him that were damaged by the anger I’d shown to him, even if he couldn’t remember it, and start healing it. We prayed a simple prayer of healing. In the years since then, I’ve seen growth in our relationship and his receptivity to me (i.e. not reacting as strongly or quickly towards me in anger).

Then that first night after this summer’s MPC, I poured into my son and daughter the words that described the best of my thoughts and feelings about them when they were little and as they’ve grown up so far. When I finished, my son volunteered something like, “Mom, when you say those words, I feel strong inside and full.” My daughter called them “True words” and in my mind I saw the word True capitalized. I’m so grateful to you and to God for the ability to mother in such a holy way.