By Leanne Payne
from her newsletter archives, Easter, 1986

“We are not sent to battle for God, but to be used by God in His battlings.”
Oswald Chambers, My Utmost for His Highest, 1/19

“… it matters enormously if I alienate anyone from the truth.”
C. S. Lewis, Problem of Pain

The old verities, the true nature of God and of His revelation to us in and through Christ, can never be yielded up. There are things we can disagree about, and variously stress, but we must always and earnestly contend for the essentials of the faith. Today little heresies (that will grow to be very large later on) are popping up in places we’d never expect to find them. Large ones too. Of course! Where else but the Church, where else but where revival and renewal are earnestly sought! This has been true throughout the ages, and heresies have served the Church in that they keep her humbled and alert, studious and prayerful. They force her to clarify and define, for each succeeding generation of Christians, “the faith once delivered to the saints” Jude v. 3.

But one of the things characterizing the current scene that concerns me most is the lack of love for truth itself. One devout, highly respected theologian, after trying to deal with the individuals responsible for spreading error, recently said to me in utter amazement, “They do not care about truth!” What they did care about were other’s feelings, how others thought about them, and about how things looked to other people. All this reflects the spirit of the age, one that loudly proclaims there is no ultimate truth to be known. Our love for Christ and for others is sentimentalized and even grossly psychologized when we no longer honor and care for the truth that is accessible to the holy intellect, i.e., reason enlightened by the Spirit of God in and with His people.

“Buy the truth and do not sell it; get wisdom, discipline and understanding.” Prov. 23:23

But we live in a day when many of our leaders find it oddly difficult to contend for the truth. The spiritual, moral and intellectual sinew needed to confront and replace the false with the true is oddly disengaged, missing. This has to do with the crisis in masculinity, and with the failure to not only love the truth, but to speak and be the truth in this our day.

So today we see error spreading, some of it spinning out of the muddy mysticisms, some out of rational thought separated from the truth of revelation. And when the Church does not listen to the prophets and true theologians God has always been faithful to send her, when she closes her eyes to error and pretends it is not there, it is then she finds herself at the mercy of certain cult hunters gone awry, men with no positive ministry but with a tremendous raw drive toward power (the masculine in separation from love and the fullness of truth), and a blind will to annihilate all they do not understand. The next big healing within the Body of Christ is, I believe, the healing of our true leaders, the restoration of their capacities to love and speak truth. 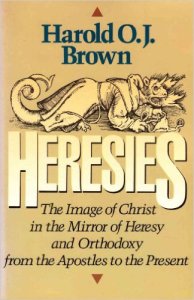 Recommendation: Heresies: The Image of Christ in the Mirror of Heresy and Orthodoxy from the Apostles to the Present by Harold O. J. Brown. Of this book Prof. George H. Williams writes: “Professor Brown has no difficulty in recognizing the positive role of all premature and partial formulations, heresies, in obliging the Church catholic and evangelical to become as clear as it finally did at Chalcedon, renewing this faith in fresh formulations at various subsequent moments in Church history. He regards heresy of either type, premature or of undue concentration on a special aspect of faith, as a succession of formulations that, though causing temporary confusion and even schism, have served the theologians of the Church catholic down through the centuries in clarifying the faith without the loss of the plenitude of Christ. He would, of course, deplore any past mistreatment of heretics, many of whom, he acknowledges, were personally courageous and often theologically creative, too often mercilessly maligned for many spurious reasons by the eventually victorious orthodox. The author would agree with Hilary of Poitiers that ‘the errors of heretics . . . force us to deal with unlawful matters, to scale the perilous heights, to speak unutterable words, to trespass on forbidden ground,’ compelling ‘us to err in daring to embody in human terms truths which ought to be hidden in the silent veneration of the heart’ (On the Trinity 2.2).”