The Cross – from Leanne’s Archives

By Leanne Payne
from her newsletter archives, Summer, 1993 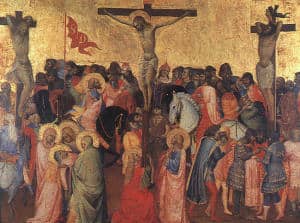 The Cross is the Abyss of Wonders,

the Centre of Desires, the Schole of Virtues,
the Hous of Wisdom, the Throne of Love,
the Theatre of Joys and the Place of Sorrow;

It is the Root of Happiness,

and the Gate of Heaven.

I know of no modern poet who could have penned these words. There may be such a one whose lifelong meditation on Christ’s act of redeeming the world approaches the depth of the understanding this seventeenth-century Anglican poet-clergyman had, but he would have to be described, along with the likes of C. S. Lewis, as a dinosaur that somehow miraculously survived, and then suddenly appeared in this our time with its full Judeo-Christian symbolic system intact.

I read Traherne’s words to the precious folk in Denmark. I can still see the astonishment on one young man’s face. His was a wonderful one that reflected utter amazement and mutely shouted, “What in the world do such words as those mean?” Perhaps for some of you one phrase stood out. Write out that phrase in your journal just now, and then listen to God about what it means. Let the Scriptures speak to you anew of Christ’s Cross, and allow them to illumine the phrase that touched your soul. Whole books could be written on single phrases of Traherne’s eulogy. Don’t try to do that (just yet!), but begin to write out what echoed in your heart as you heard that truth.

Those of you whose hearts particularly resonated to the Cross as the “Abyss of Wonders” should not read the following until you’ve meditated upon it for yourselves. This is how it echoed in Andy Comiskey’s heart:

This means freedom from fear.
No matter what man has done to me, or will do.
No matter how badly I have fallen and have incurred the
consequences, all that raises its head above the
Lordship of Christ will die.

It dies as I dare to allow Jesus to reveal my sin
or that of another against me. I believe such revelation
is a risk – to face one’s blackness, to step off the
ground of one’s own seeming wholeness and into the
abyss of brokenness.

But that is where Jesus is found. He descended into the
abyss. In His crucifixion, He was swallowed up by the
blackness but not extinguished. In truth, the deeper He
descended and the weaker He became, the more He
revealed His power

For the abyss finds its end in Jesus. He established
the ground of the abyss by planting Himself at its
darkest, most sordid point, and then unfurling Himself
there, in glory. He frees the disfigured to rise with
Him in newness of life, in order to restore them to
their true design.

Our private and interpersonal abysses find their end in
Jesus. He establishes the wonder of His love and
creativity in those formerly hateful and barren places.
He unfurls there and raises up one like myself to
proclaim His substantial truth on the very ground once
claimed by the darkness.

I italicized the last sentence of the above in order to point out the incarnational reality inherent in Andy’s words. The weapons of our warfare are incarnational; they have to do with the Real Presence of God with and within us. If I stand and preach the gospel of the Kingdom of Heaven, and am not living in its incredible, substantive reality, if in other words, I am not married to Christ, and thereby a vessel that both holds and emanates His righteousness, I will be unable to speak and to be the truth our age is dying to hear. This gospel, in its incarnational form, that is, preached in the power of the Presence, delivers souls from the spirit of this age. It gains us a full divorce from Baal and Ashtoroth, Molech and Mammon, and espouses us to God — Father, Son and Holy Spirit. It heals. I will do no good, no matter what I say and teach, if I am not myself a living epistle, one from whom the very Light and the very Holiness, and the very Glory of God Himself emanates — even explodes into the lives of others who hunger for God and for meaning.

And that means I will be all the more human, fully human. The earth was given to us, the Scriptures tell us. I’ll be of the earth, earthy, feet flat on the ground, toes dug into the good earth, cherishing it. Yet I’ll be looking straight up to God, hands stretched up and out to Ultimate Reality, aware that God’s Spirit lives in me, aware of my immortality and that the more fully human I am, the greater capacity I have to carry and manifest the eternal, the heavenly.

You may want to share what the Lord speaks to your heart in regard to one of Traherne’s phrases. Address such a sharing to MPC, P. O. Box 3792, Peoria IL 61612-3792. Also, you may want to share about a healing you have received in a MPC conference, and we invite you to write that out as well. To write the story of our healing is nearly always to understand and receive more! We are listening in the Presence and celebrating God’s mighty hand upon our lives.