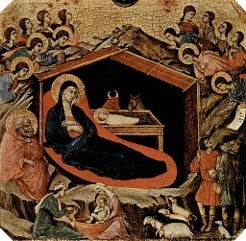 For you know the grace of our Lord Jesus Christ, that though he was rich, yet for your sakes he became poor, so that you through his poverty might become rich. (2 Corinthians 8:9)

A friend of mine, interceding for a newborn baby in the hands of a pathologically selfish mother, could not sleep for her extreme concern for the child. She had tried to procure help for the baby, but all her efforts (and seemingly even her prayers) had failed. “I had the feeling I was taken in a battle and could nearly hear the clash of the arms.” She was immersed in a vicious circle of negative thoughts. In her despair and crying out to God she picked up the New Testament, determining to read it until she came to the answer. She was quickly led to the account of Christ’s birth and suddenly, in a profound night vision, she was taken by the Spirit to the crèche of the Infant Christ—whose very life on earth was endangered from the beginning. Looking in, she experienced for a brief moment something of the unthinkable humbling and vulnerability of the Babe who was human but also God. She understood what this impoverishment had cost Him. In grieving over the powerlessness of the newborn she was so concerned about, she was thus reminded of the Christ child’s utter powerlessness, a poverty He chose to take upon Himself so that He might bear ours.

My friend was supernaturally comforted and enabled to pray in faith for the baby born into the care of an unfit mother. At this Christmastide when she and I were in the midst of other difficulties—even some strong spiritual warfare—and the going was the roughest, she would say to me in hushed tones, “Oh, just go look into the crèche; Oh, just go and look at the Baby.” An intuition far beyond the ordinary of what Christ’s incarnation—the central miracle of all time—really means, together with a tiny hint of what it had cost Him and the Father, was afforded her. She would never again be quite the same.

The incarnation of Christ is staggering. That the Creator of all worlds yearns to be our Father and gave Himself to us in such a special way in His Son—the Son whom He sent into our dark world through the womb of Mary to grow in the form and flesh of man—is something to be grasped only as the Father Himself gives the power. And we, like Mary, believe in order to receive that “Holy Thing.” Then we find ourselves as extensions of the incarnation by the pouring out of God’s Spirit on us. This too we can only grasp as our Father gives it to us, pouring out on us our personal Pentecost. Even then it is staggering to the imagination. That the God of all that is not only redeems but reveals His mysteries and presence to mite‐sized people is almost more than the human mind can at first receive.

Meditating on this, I was particularly struck with these last words of Christ before His ascension:

All power is given unto me in heaven and in earth. Go ye therefore, and teach all nations, baptizing them in the name of the Father, and of the Son, and of the Holy Ghost: Teaching them to observe all things whatsoever I have commanded you: and, lo, I am with you always, even unto the end of the world. (Matthew 28:18–20, KJV, emphasis mine)

The “all power” is in such contrast to the poverty and humility He knew as the divine Son who “laid aside His glory” and “emptied Himself.” His state of vulnerability never once veered but rather culminated in the cross and His full sacrifice for our sin. And Paul says that we should imitate Christ’s humility, even that our attitude should be as His:

Who, being in very nature God, did not consider equality with God something to be grasped, but made himself nothing, taking the very nature of a servant, being made in human likeness. And being found in appearance as a man, he humbled himself and became obedient to death—even death on a cross! Therefore God exalted him to the highest place and gave him the name that is above every name, that at the name of Jesus every knee should bow, in heaven and on earth and under the earth, and every tongue confess that Jesus Christ is Lord, to the glory of God the Father. (Philippians 2:6–11)

The immensity of who we worship, and who we become—real persons—sons and daughters of God by adoption into Christ, prepares us to look at the divine humbling and the incredible scriptural mandate to imitate it.

From the beginning of my adult walk with God, I have been struck by the mystery of the birth of Christ into human form and history, and what it means to those of us who accept Him as the divine son of man, the Messiah and suffering servant. These seven words of Jesus to the Father, “I in them and you in me,” express the central thought and point of everything Christian. He came, He died, He rose again, He lives forever. All this so that we might know this two‐fold incarnation of the Father in the Son and the Son centered in us, the people of God.

This Christmas season, as I continue to gaze into the crèche at the God‐Baby who humbled Himself to put on our flesh, I am again reminded of the poverty of spirit, soul, and body I knew when I was separated from Christ, and from holy converse with Him. My blind and deaf state into which He descended and confronted was one of terrible vulnerability.

While in the midst of these thoughts, my heart overflowing anew with wonder and thanksgiving to Him whose acts utterly changed my life, a cousin whom I had not heard from in many years contacted me. “Leanne,” she said, “I’m so amazed at what you’ve done,” and here she faltered, saying, “and from such a poor beginning.” Afraid her candor would be taken amiss, she had no idea how her words blessed me, affirming what my heart was remembering. For a moment she seemed to stand with me in awe at the God who takes broken lives and not only mends them but gives them meaning. And of course I cried out, “It was the Lord!” This was no trite reply—it welled up from a sure knowledge of what would have happened to me apart from the gift of incarnation, the gift of Christ’s life in me. After talking with her, I cried out in praise to God:

O Lord, it was You
It is You, O Lord
I heard you in the midst of my extreme need;
I heard you say, “You have not because you ask not.”

O Lord, long ago I trusted in You, and You saved me utterly. You took me up from the ash heap,

a place of powerlessness and death

And made me fruitful.

You made me as a tree whose branches reach out in every direction,
Bearing Your rich fruits of all kinds and dripping healing waters, resins, and oils.

You caused my roots to grow down deep
To tap into hidden reserves of goodness, beauty, and life.

Writing my prayer as fast as I could before the Lord, I continued to praise Him. A number of very special blessings and honors came my way, ones I had never expected to receive, and I cried out, “Lord, it is all gift. Why me, Lord, why me?” And here again I realized this joy of fruitfulness is for all who are willing to “put on Christ” and imitate Him in His poverty. It is merely what the good news of the gospel promises. It is merely answered prayer. It is for all who hear Him say, “Put Me on, receive Me into your deepest selves, walk with Me in obedience.”

artwork:
The Nativity with the Prophets Isaiah and Ezekiel by Duccio di Buoninsegna
1308/1311