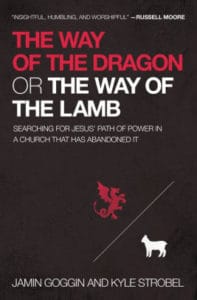 I discovered The Way Of The Dragon Or The Way Of The Lamb: Searching for Jesus’ Path of Power in a Church that Has Abandoned It through a Christianity Today article written by Jamin Goggin and Kyle Strobel (see Confronting the Toxic Power in Me). At the time, I was studying the topic of spiritual power and authority, both its true manifestations and sinful distortions. In The Way Of The Dragon Or The Way Of The Lamb, Goggin and Strobel convey an earnest commitment to Christ and love for His church by separating the clean from the unclean in regards to Christian power. They write humbly, confessing their own vacillations between the Christ’s way of power and those of the world, drawing on the wisdom of some exemplary spiritual fathers and mothers. Several of the chapters describe their meetings with J. I. Packer, Dallas Willard, Marva Dawn, John Perkins, Jean Vanier, James Houston, and Eugene Peterson who each contribute key insights into the unbridgeable gap between the way power is used by the world, flesh, and devil and the way of Christ.

The Way Of The Dragon Or The Way Of The Lamb is an important read for pastors and ministry leaders. But I also believe it’s important for all of us who are being pastored and led. We live in a day when many are unaffirmed and are therefore easily tempted to either grab worldly power themselves, or to excuse and even idolize leaders whose wrong uses of power seem to bring ministry success. Christian leaders, supporters, and followers alike need to hear the correction, challenge, and inspiration offered in this book. I’ll share here a couple of passages, first on identity, and then on the importance of Sabbath:

“What we face in the world today is a self-achieved identity. As Christians, we believe in a given identity, not an achieved one. The Christian is found in Christ. The self-achieved identify is very fragile because we have to sustain it. Nobody else is going to sustain it for me when I have built it up myself. The result of this is a tendency toward narcissism, because there is a depleted sense of self. This is not what God ordained that we should have for an identity” (41, quoting James Houston).

“The wilderness was supposed to be a time of ‘putting off’ the way from below and ‘putting on’ the way from above. The wilderness was supposed to be an education in faithfulness. God led his people in specific ways to shape their hearts and minds to present themselves to God, to participate in His way, and ultimately to proclaim his name to the world (Isa. 49:6)…

We are now in a different sort of wilderness – led out of the world and into the kingdom of Christ – awaiting the promised land that will come when Christ returns… On our day of rest we remember our own leaving behind the land of slavery (the world, the flesh, and the devil), and we fix our hearts on the journey toward the promised land. While Sabbath might have seemed odd, lazy, and utterly counterintuitive, it was God’s way of realigning the hearts of his people to his way. Our actions on the Sabbath day will seem odd and worthless to others as well, but when they are grounded in God’s work to bring us through the wilderness and into his kingdom, they reveal God’s deep recalibration of our hearts to his way” (174, 175).